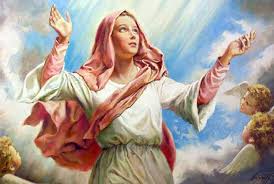 Every August 15, many Catholics celebrate the feast of the Assumption of Mary. It’s a time Mary’s ascension to Heaven – body, soul and spirit – is observed.

I saw one of such celebrations years ago. The statue of Mary in the church was dressed up for the occasion and surrounded by an arch of beautiful flowers. After the procession, a crowd of Catholics gathered before it, holding their candles and sang.

The scenario was similar to Hindus carrying lamps before goddess Lakshmi during Diwali or devout crowds singing to the sea goddess in Brazil. “Our mother Mary has been assumed and glorified,” said a man “and we know that one day we are going to be glorified as she is now.”

The belief that Mary was taken up to heaven is not in the Bible, since little is said about Mary in it anyways. Even Apostle John, the longest lived apostle, didn’t write about this.

Catholics have attempted to “find” this belief in Psalm 132:6-7 predicated on a false assumption that Mary is the ark of God. This is an attempt to graft an error onto another error.

Others point to Revelation 12:11-12. Of course, no one is denying that God is able to take people to heaven bodily (like He did for Enoch and Elijah), but since this didn’t happen to everyone in Scripture, it can’t be applied to Mary.

It’s just like saying everyone who mocks us must die because bears killed some youths who mocked Elisha. That would be irrational.

Catholics believe Mary died of a broken heart and on the third day, the apostles couldn’t find her body; she had been taken to the Celestial paradise where she was to have a throne by Jesus’ right hand as the “Queen of heaven.”

These beliefs were obviously contrived to exalt Mary to the divine plane which Jesus Christ is, and replace Him. But as far as the Bible is concerned, it is Jesus who is at God’s right hand, He alone is the Mediator and the King of kings, not Mary.

The New Catholic Encyclopedia admits: “There is no explicit reference to the Assumption in the Bible, yet the Pope insists in the decree of promulgation that the Scriptures are the ultimate foundation of this truth” (Vol. 1, 972).

If this belief lacks Biblical support, what about support from tradition? David Farmer stated:

“[I]n the early church, as in Christ’s ministry, she [Mary] remained so much in the background that it is difficult to know where she lived or even where she died. Both Ephesus and Jerusalem claimed to be the place of her death, with the Eastern Fathers generally supporting Jerusalem” [1]

Catholic scholars say: “Furthermore, the notion of Mary’s assumption into heaven has left no trace in the literature of the third much less of the 2nd cent. M. Jurgie, the foremost authority on this question concluded in his monumental study: ‘The patristic tradition prior to the Council of Nicaea does not furnish us with any witness about the Assumption.” [2]

Early church fathers like Clement of Rome, Ignatius, Tertullian, Melito, Cyprian, Irenaeus, Theodoriet, Cyril of Jerusalem all lived and died, wrote volumes of theology and wrote thousands of works on diverse topics without uttering a single word about the Assumption of Mary.

Catholics argue that the grave of Mary was unknown therefore, she must have been taken to heaven bodily. But early church writings show that the burial sites of many other early Christians were also unknown. For example, John Chrysostom wrote:

“And as to those of the Apostles we do not know where those of most of them are laid. For of Peter indeed, and Paul, and John, and Thomas, the sepulchres are well known, but those of the rest, being so many have nowhere become known. Let us not therefore lament at all about this, nor be so little minded. For where-ever we may be buried, ‘the earth is the Lord’s and all that therein is’ [Psalm 24:1]” [3]

Eusebius also made reference to Dionysius of Alexandria (a 3rd century bishop) who fled with his wife to the Arabian mountain and did not return, neither were their bodies found (Church History 6: 42: 3).

Now, if Eusebius considered the disappearance of a common bishop so important, wouldn’t he have recorded the bodily assumption of Mary if it was true? At least one church father would have mentioned such a key event.

If you examined the writings of the church fathers, you would realize that they were silent about the Assumption. Why? Because it never happened!

Tertullian, for example, cited Enoch and Elijah (in Treatise on the Soul, 50) without including Mary.

Irenaeus in Against Heresies (5:5), wrote about the power of God to deliver people from death and used Enoch, Elijah and Paul as illustrations of those “assumed” or “translated” but says nothing of Mary.

An opponent of Augustine also wrote to him saying:

“Besides that, it is not only Elias, but Moses and Enoch you believe to be immortal, and to have been taken with their bodies to heaven.” [4]

Why would Christians for hundreds of years have known about a bodily assumption of Mary and yet say nothing about it? Isn’t that strange?

It’s often argued that Epiphanus wrote about the assumption of Mary, but such deductions are faulty. A Catholic scholar said:

“In a later message, he [Epiphanus] says that she [Mary] may have died and been burned, or been killed- as a martyr. Or she remained alive, since nothing is impossible with God and he can do whatever he desires; for her end, no one knows … Epiphanus does not speak of a bodily resurrection and remains noncommittal on the way Mary’s life ended … He suggests several different hypotheses and draws no firm conclusion” [5]

If the Assumption of Mary lacks historical support, where did it originate? A respected patrologist explains:

“The entire silence of the apostles and the primitive church teachers respecting the departure of Mary stirred idle curiosity to all sorts of inventions, until a translation like Enoch’s and Elijah’s was attributed to her … Two apocryphal Greek writings, de transitu Mariae of the end of the fourth or beginning of the fifth century, and afterward pseudo-Dionysius the Areopagite and Gregory of Tours (+ 595), for the first time contain the legend that the soul of the mother of God was transported to the heavenly paradise by Christ and His angels in presence of all the apostles, and on the following morning her body was also translated thither on a cloud and there united with the soul” [6]

Another Catholic scholar admits that:

“The idea of the bodily assumption of Mary is first expressed in transitus- narratives of the 5-6th centuries. Even though these are apocryphal they bear witness to the Faith of the generation in which they were written despite their legendary clothing.” [7]

What this scholar doesn’t admit however, is that these transitus writings were condemned as heretical by Gelasus, the bishop of Rome.

In the 6th century, Hermisdas, another bishop of Rome, called anyone subscribing to the assumption belief a heretic. It wasn’t until 1950 that this myth became a dogma.

“Pope Pius XII … defined it as a divinely revealed dogma making claims that have little historical support: What is clearly true is the recognition that it is ‘deeply embedded in the minds of the faithful’ (or at least many of them), and on this basis it was declared and defined as a dogma revealed by God.” [8]

This brings us back to the issue of Roman Catholic authority. Their final authority is their “Church” leadership (sola ecclesia) not the Bible or even their traditions.

This is why they dismissed the church fathers and endorsed spurious apocryphal legends on this issue. They just wanted their “Mary” exalted, no matter what the Bible or history says.

From pagan times, the month of August had been a period of feasts for pagan goddess Diana and Isis, thus the smooth transference to the Catholic Mary.

In Astrology, Virgo (the queen of heaven) is believed to rule over the period between August and September.