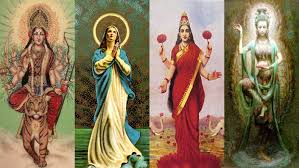 The following is a reply I got from Mark in my combox to the post The Myth of Mary’s Assumption. His words will appear in blue.

“Why non Catholics spend inordinate time picking apart our Catholic faith is beyond me!”

If your ‘faith’ is a distortion of the “original gospel that was once for all handed down to the saints,” then every Christian has a spiritual and moral obligation to contend for that undefiled good news (Jude 1:3).

If you are convinced that your hallowed beliefs are being ripped apart, perhaps you might want to place them under the scrutiny of Scripture and history to see where the truth lies. This is about the eternal fate of souls not emotions.

“Billions of Catholics over the world venerate Mother Mary Our Divine Mother who was ever-present at her Son’s side at his most uplifting and darkest moments.”

That billions of people subscribe to a myth doesn’t make it true. God is not a respecter of numbers. If Mary is your ‘divine mother’ and God is your divine father, what are you insinuating?

Go to the Old or New Testament, where in either covenants do you find any arrangement for a ‘divine motherhood’ much less a hint that Mary – a mere mortal – contributed anything to the sacrificial death of Jesus on the cross?

The only places you’d find such patterns of beliefs and rites are ancient paganism and modern witchcraft. It’s time you admitted that at some point, pagan horses had been switched mid-stream within Catholicism.

“We wouldn’t care either if anyone quote “that is why I will never be Catholic”. Instead of analyzing and over analyzing we in the Christian community would be better off putting the Word into action.”

Speaking of your definition of “the Word,” why not break it down? You believe the Bible, plus Traditions and the Church Magisterium make up the “Word.”

By elevating the words of uninspired men to the level of inspired Scripture (and as we know, even denying the plenary inspiration of Scripture), the Catholic religion has trapped many sincere souls in a tunnel of spiritual darkness in which they are bound to follow rules and beliefs that oppose the Bible and are void of human conscience.

“Instead of passing judgement – on a religion thousands of years old built on authentic discourse. “

If a religion’s validity lies on being thousands of years old, then why not embrace Hinduism or Buddhism? Not to mention, the discourses on which Rome’s power sprang up are outright forgeries and layers of fiction. The Donation of Constantine and Isidorean Decretals are some examples.

“Religion is not going to get us into heaven. Catholics are mature enough to know that saying 100 Hail Mary’s will not get us into heaven. However as we build to eternal glory with the Father in Heaven we continue to ask our Most Divine Mother to intercede for us – and send our innermost prayers to the Father.”

This is what I call forked tongue rhetoric – denying a belief in three sentences and expressing it in the last one. That’s a symptom of years of systematic mental conditioning; it runs so deep that you’ve found a way to reconcile the inherent contradictions packed into the teachings you’ve embraced. So you say more about what you believe by not actually saying it. Nice job.

Furthermore, by asking this ‘divine mother’ to intercede for you to qualify for heaven, you explicitly admit that the intercession and mediatorship role of Jesus Christ is lacking and there is another you’re trusting in. Thanks for reinforcing our convictions of Rome grafting goddess worship onto Christianity.

“The problem critics of the faith people will have with people like us, who are born Catholics and revere our faith is that we do not have to explain and analyze why we celebrate this GREAT feast of the ASSUMPTION, furthermore why we VENERATE Mary! That is why we call it a MYSTERY. Mystery of our faith. It is beautiful as it is a treasure only we as Catholics can hold dear to our hearts. So I as a Catholic won’t explain this mystery and analyze it – I don’t have to.”

The Greek word for mystery in the NT is musetrion and it was never used to denote a secret that shouldn’t be revealed. Instead, it was always used to refer to knowledge that is being revealed. For example (all quotes are taken from the Catholic New American Bible):

“I do not want you to be unaware of this mystery, brothers, so that you will not become wise [in] your own estimation…” (Romans 11:25)

“…you have heard of the stewardship of God’s grace that was given to me for your benefit, [namely, that] the mystery was made known to me by revelation, as I have written briefly earlier.” (Eph. 3:2-3).

“the mystery hidden from ages and from generations past. But now it has been manifested to his holy ones” (Col. 1:26).

“…I will explain to you the mystery of the woman and of the beast that carries her, the beast with the seven heads and the ten horns.” (Rev. 17:7).

God who wants us to “always be ready to give an explanation to anyone who asks you for a reason for your hope” would certainly not exalt ignorance by obscuring a core doctrine of the faith behind a complicated maze of “mystery” (1 Pet. 3:15).

“As many many other Catholics around the world do. So people like you who find time to criticise will be even more frustrated. You deny Mary you deny Christ. Let’s find time reflecting on the Word instead of bashing other faiths.”

Your final line is a display of relativism. That logical fallacy torpedoes the pillars of the faith you’re alluding to, unless, of course, you’re a syncretist.

I think those who presume that God had glorified a human being and made her the central focus of a faith will come up frustrated whenever they try to read their dogmas into the revealed Word of God.

Your second sentence is quite revealing, perhaps not in a way you intended. To you, Jesus, the Eternal Word who called all men to Himself and even forgave the repentant sinner on the cross without any intermediary cannot be seen without Mary – a mere servant of God who had no redemptive powers whatsoever. This is a diabolic deception. Call that whatever you like, but it’s not true Christianity.