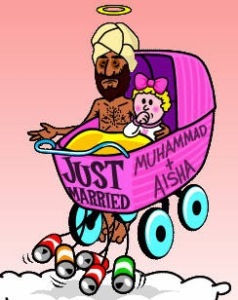 One of the evidences that Muhammad was not a prophet of God but a sexually depraved man was his predatory relationship with Aisha who was six years old, while he was in his 50s. Some Muslims are quite embarrassed that their guru indulged in this act, and try to come up with different excuses to evade or justify it.

Other Muslims are not so moved; they brag of it and demand others respect their rights to emulate their paedophile prophet. Before I look into some “rationalizations” Muslims give, let me first document this from Islamic sources:

1. “Aisha reported that Allah’s Apostle married her when she was seven years old, and she was taken to his house as a bride when she was nine, and her dolls were with her; and when he (the Holy Prophet) died she was eighteen years old.” (Muslim 2:8:3311)

2. Narrated Hisham’s father: “Khadija died three years before the Prophet departed to Medina. He stayed there for two years or so and then he married ‘Aisha when she was a girl of six years of age, and he consummated the marriage when she was nine years old.” (Bukhari 5:236)

3. Narrated ‘Aisha: “The Prophet married me when I was a girl of six (years). We went to Medina and stayed at the home of Bani al-Harith bin Khazaraj. Then I got ill and my hair fell down. Later my hair grew (again) and my mother, Um Ruman, came to me while I was playing in a swing with some of my girlfriends. She called me, and I went to her, not knowing what she wanted me to do. She caught me by the hand and made me stand at the door of the house …

“There in the house I saw some Ansari women who said ‘Best wishes and Allah’s blessing and a good luck’. Then she entrusted me to them and they prepared me (for the marriage). Unexpectedly, Allah’s Apostle came to me in the forenoon and my mother handed me over to him, and that time I was a girl of nine years” (Bukhari 5:234).

4. “[T]he Apostle of Allah married her when she was six years old and he consummated his marriage when she was nine years old, and then she remained with him for nine years (i.e till his death)” (Bukhari 7:64/65).

Even though the hadiths are unanimous that Aisha was married at six, some modern Muslim revisionists dismiss these sources as “fake” and try to inflate her age to 13, 18 or even 20 to safeguard the image of grand poobah Muhammad. Now, let’s examine some other trump cards they use.

Child marriage was a custom in Arabia in the prophet’s time. That is why none of his enemies denounced him for it

There is no evidence that pre-Islamic Arabia married off their little girls to old men. There are no records from that period to support this claim. They betrothed their girls to boys, not to adults.

On the one hand, Muslims tell us pre-Islamic Arabs buried their female infants until Muhammad stopped it (as if they needed a prophet to tell them that was evil) and on the other, they want us to believe Arab men ravished their little girls in bed. They re-write and re-cast the past to suit their tastes.

To assert that Muhammad’s paedophilia was acceptable because his critics didn’t mention it is an argument from silence. The records of Muhammad we have came from his disciples and we all know what happened to all those who criticised him – they were either killed or silenced.

Some of the remarks from Muhammad’s critics in the Quran indicate that they perceived him as insane and demonised, so his bizarre sex acts would only have confirmed their suspicions.

Even if the pagan Arabs engaged in paedophilia, a true prophet should know better to condemn it. When a man claims to be the “best of creation” or a “honourable messenger of God,” his morals and teachings ought to be a veritable template of ideal morality – dignified above the ignorance and vices of his time.

That he followed the ignoble perversions of his pagan folks is proof that he wasn’t any different from the deluded folks he claimed to be sent to guide. No matter how Muslims slice the cake, this ultimately disqualifies Muhammad as a true prophet.

Aisha’s parents offered her to Muhammad. The marriage was to strengthen their ties with him, not for sex. Aisha herself didn’t complain of being a wife, so what’s your business?

This line of thinking can only come from a conscience that is as seared as hot iron. First, it was Muhammad who demanded to marry Aisha:

“The Prophet asked Abu Bakr for Aisha’s hand in marriage. Abu Bakr said ‘but I am your brother.’ The Prophet said ‘You are my brother in Allah’s religion and his book but she is lawful for me to marry” (Bukhari 7:18, Narrated Ursa).

Abu Bakr was already like a brother to Muhammad (that makes Aisha like a niece to him), so he didn’t have to rape his daughter to strengthen their ties. Why should little Aisha be levied out like a pawn between two grown men? This is wrong at every level. How could Allah be silent over this?

Even Abu Bakr mildly protested, “But I’m your brother” but Muhammad prevailed with the force of his personality and Abu Bakr had to “submit” like a good Muslim. In fact, Muhammad had been dreaming of little Aisha before this time:

Narrated ‘Aisha “Allah’s apostle said to me ‘You were shown to me twice (in my dream) before I married you. I saw an angel carrying you in a silken piece of cloth and I said to him ‘uncover (her)’ and behold it was you…” (Bukhari 9:140)

A man in his 50s dreaming of a girl still playing with her dolls is a pervert. What else was this for if not sex? And who would Aisha complain to? Was it to her brainwashed parents who gave her off to a lecher? Here is the point, a man who finds a child sexually appealing is mentally ill. The idea is repulsive to a normal man.

You can’t compare 6 year old girls today with desert girls of that time. There were geological and climatic factors that made them grow faster and bigger

What a silly argument. Muslims say derp things just to cleave to a false prophet. A 6-year-old child in 7th century Arabia is the same as a 6-year-old child in Africa today. There is no difference. That’s why Aisha was still playing with her dolls at that age.

What geological factors? Tectonic plates? Continental land mass? Since when did desert climate turn 6 year old girls into adults capable of choosing who to marry or consent to a mutual act of love?

Are Muslims trying to tell us that an evolutionary process has taken place in humans in the last 14 centuries? Such an idea is pure nonsense.

Muhammad married mostly widows and divorcees. He couldn’t have been a pedophile

Not all paedophiles are serial or “full blown” predators. Some of them marry adult women and still go after children on the side, some don’t. One doesn’t have to steal a hundred times or at different places to be a thief.

Muhammad was 50 at the time his first wife, Khadijah, died. All the other women he married were either teenagers or in their early 20s.

He solicited Hind Abu Talib, his cousin, to marry him, but when she told him she had a child, he desisted. When he asked someone to solicit Zia’h bint Aamir for marriage, she accepted, but when he was told of her age, he declined also (Tabari, IV:1298).

Muhammad also sent a message to a beautiful widow, Zabaa, through her son. When he learnt she was no longer young, even though she accepted his proposal, he remained silent” (Ibn Sa’ad, Tabaqat 8:157).

In the hadith, he asked Jabir ibn Abdullah, “Have you got married?” He answered in the affirmative. Muhammad enquired, “A virgin or a matron?” He responded, “I married a matron.” Then Muhammad said, “Why not a virgin? So you may play with her and she may play with you?” (Bukhari 3:34:310).

Muhammad was indirectly reiterating how he fondles little Aisha:

Narrated ‘Aisha: “The Prophet and I used to take a bath from a single pot while we were Junub. During the menses, he used to order me to put on an Izar (dress worn below the waist) and used to fondle me” (Bukhari 1:298).

In Judaism, little girls were also married off. Even Mary the mother of Jesus married 90 year old Joseph when she was 12. Europeans and Indians also observed this

This is an argument of desperation. In Judaism, betrothal is conducted when both partners are young. The actual marriage takes place when they both grow older. This is far different from a filthy old man wobbling naked in bed with a 9 year old girl.

The only source Muslims derive the “90-year-old-Joseph-marrying-12-year-old-Mary” from are apocryphal works which everyone agrees are fanciful legends.

Notwithstanding, the works indicate that Mary gave birth to Jesus at 14 or 16 (New Advent Catholic Encyclopedia, “St. Joseph”) Even if these myths were true, they prove nothing because Joseph is not a “perfect example” for Christians as Muhammad is for Muslims.

The appeal to some European or Indian child marriages centuries ago is irrelevant. Royal families in Medieval European did arrange prepubescent girls for marriage but they often waited till puberty to consummate it.

Besides, none of these people ever claim to be “perfect examples” for mankind. Even the Hindu Vedic scriptures mandates marriages to be three years after puberty. Muhammad was still a pervert by their criteria.

Oh yes, we should. In as much as he presented himself as a “perfect example” for Muslims to follow, we need to question his morals. Children are being raped in Islamic nations today because of the legacy of this disturbed man.

They also practice Mufakhazat Alzigaar (called “thighing”), in which an adult man puts his penis between the thighs of a female child and moves back and forth till he has a release.

An official fatwa issued in Saudi Arabia says this is legal because Muhammad practiced “thighing” on Aisha when she was six years old until she reached mine years (Fatwa #31409).

In the third hadith I quoted at the beginning of this piece, Aisha said she became sick and lost her hair after marrying Muhammad. That could be a sign of distress from sexual abuse.

Medical science has established the damaging effects of child marriage. It results in complicated pregnancy and childbirth due to underdeveloped pelvis and birth canal of the girl child.

Child marriage has been linked with cervical cancer, pre-term delivery, STDs, infant mortality and a 88% chance of having obstetric fistula which can result in permanent disability (Journal of Gynecology and Obstetrics, 2004, 87:72-77).

The power and control the man has over the child bride can also lead to domestic violence and marital rape resulting in social isolation and other psychological maladies.

These are marks of a cult of child destruction and anyone who is not ashamed of following a 7th century paedophile has abdicated his/her humanity.

One thought on “On Muhammad and his Paedophilia”