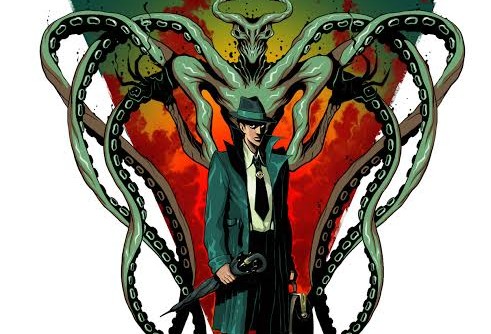 The Tentacles of the Occult part one.

They work in secret because they are in darkness and their works are evil.

God “so loved the world that he gave his one and only Son” (Jn. 3:18). His giving us His only Son shows us that He also freely gives us all other things.

But Satan never gives his life for anyone but instead demands they give up theirs or those of their loved ones. Like the boy who left a suicide note saying:

“Dear Grandma and Grandpa, please forgive me but tonite [sic] is the night I give my life to Satan. I am going to sacrifice myself” (Arizona Republic, March 22, 1998, 6).

He was deceived by Satan to sacrifice himself so as to get a higher place in Hell. He will be shocked to see that there is no “higher place” but eternal torment! Dabbling in the occult is like a fish striking a baited hook. It may get a small reward, but what a great price it pays!

Satan disguises himself such that most entry-level occultists don’t even know he is the source of their powers. They will sometimes argue that they serve Lucifer, the god of good, not the evil Satan Christians describe – even though their books indicate that both names refer to the same person.

In Diabolicon, Lucifer is the name of the archdaimon Satan. In Grimorium Verum, Lucifer is called “the emperor of spirits.” The Magus calls him the “Prince of Rebellion, angels and darkness and ruler of the infernal world.” The Satanic bible says he is one of the “princes of Hell” related to air and the East.

Most interactions in the occult are with evil spirits than Satan because he’s not omnipresent, so his army of demons fill in for him.

This is why a Christian toying with the occult is actually partaking of “the table of demons” and whatever they offer him/her at that evil dining table has serious tragic consequences (1 Cor. 10:21).

In the Sixth and Seventh Books of Moses for instance, there are different seals and “tables” of demons from which occult power can be drawn – those in the air, water, fire, earth and the planets. As a person invokes these demons, he/she has to pay the price that comes with it.

“In the lodge we made use of so many magickal books … As many members were afraid to tackle the books by themselves, they appealed to me to make them rich, which I later did and they received the repercussion. Some died, while others lost their children, because in Magick, nothing is free. It is of Magick and of pact” (Christian Alive magazine, Vol. 2, No. 14:6).

Any involvement in the occult, no matter how lightly can have serious consequences. A lady described her ordeal after using an Ouija board:

“I started to experience strange things. For example, in the middle of the night I’d awaken by the sound of someone running down the hallway and opening or slamming the front door. I would get up to check it out, but there was nothing to see … I would hear someone walking up my bedroom steps and walking across my floor towards me in bed. I would turn around, but no one was there. I would lie in bed and feel the entire bed shake as if it were pushed. Shadows would move across my walls when there was nothing to cast a shadow” (Christian Alive, November/December 2004, p. 2).

Most demons invoked in witchcraft have their specialty, rank, element, sigil and animal emblems. For example:

• Asmodeus (symbolized by the whale) specializes in breaking marriages/relationships and sexual lust.

• Abbadon is used for occult warfare and is summoned in satanic rites.

• Ashtaroth (also called the Queen of heaven), is symbolized as the cobra or lion. She is said to impart divination abilities, offer connections with world rulers and teach occult sciences.

Thoth/Hermes is the demon behind occult healing and magic.

Adrammeleck is a demon of occult destruction and is another name for Molech.

The reality is that demonic spells do not always work. This is why an applicant has to practice blood rituals and human sacrifices to get more power. Thomas Keziah, an ex-witch recalls:

“We began by using cats …We practiced cruel tortures on these poor animals for our own pleasure. We got worse and worse the more spirits we called and started to use dogs, pigeons …We sacrificed animals, humans, anything we could get to serve our master Satan. We all grew to love the taste and sight of blood as we powered up to fight our enemies [Christians].”

When a Christian (or non-Christian) is trapped by occult tentacles, there are certain symptoms and signs that would be seen. Dr. Neil Foster calls this the Occult Subjection Syndrome (OSS). It is an occult penetration – whether superficial or massive – of dark powers into a person’s life. These are some symptoms of OSS:

1. Obsession with death, torture or suicidal themes in speech or writing. Another is an obsession with horror or occult movies.

2. Gothic dressing (black clothing, make-up, hair dyed black and fingernails), use of occult jewelry, strange attires. Some witches are demonically programmed to appear this way, while others aren’t.

Famous witch, Laurie Cabot, belongs in the former category. She told Oprah Winfrey many years ago:

“We wear black because it’s a tool – it’s like wearing a rainbow, it draws in light, so it helps us to be more balanced and psychic. We use our tools, we emulate our gods and goddesses by dressing and wearing makeup, and that’s our emulation.”

3. A strange pleasure derived by torturing/mutilating animals or humans.

4. Intense sexual depravity. Sexual restrain is one of the first virtues that is quickly broken down by the occult. Demon worship often opens people up to perverse spirits which lead them into sexual excesses.

5. Heightened interests in or obsession with occult art, books, themes and websites.

In 2009, during my university days, a Christian lady who was hooked on Rosicrucian websites was introduced to me by a mutual friend. When we met, she had a strange aura about her.

I was unable to discuss with her as she brought up arguments that entirely changed the subject. That was a tactic her demons used to divert me. I know better now.

6. Obsession with occult music, lyrics, symbols or paintings. They may have tattoos of such symbols on their body, or use it as their display pictures on social media. They may write strange codes or dark poems in books or journals.

7. Involvement in spells and sorcery. This is evident by finding an altar in the bedroom, often laced with incense, candles or pictures of satanic icons or occult books.

There are also some signs the person shows.

1. Writing/spelling words backwards. This code was also elucidated by Aleister Crowley in his satanic revelation:

This “law of reversal” is also utilized by some occultists in the entertainment world.

2. Personality changes. A naturally kind, jovial person quickly changes into a depressed, slovenly, violent and argumentative persona. Rebellion is usually a vital sign. Some will start to talk like a sage or in rhymes.

3. Becoming very secretive and reclusive. There seems to be a mind control spirit that usually latches itself to people dabbling in the occult. It makes them pull away from everyone – especially from real Christians – and will only make them move with like-minded folks. It is a method used to seal their minds from the truth.

4. Hearing and seeing what others can’t. Most occultists hear demonic voices in their heads.

I know a guy who hears such voices and they would even instruct him on the specific spices to add to his food. Seeing demons physically or sensing the least demonic vibrations is another common sign.

5. Loss of humour. The person habitually wears a dark countenance and lacks normal human emotion. He only responds to the demonic “triggers” planted in his mind.

6. A piercing gaze, or a “lifeless” look in the eyes. It indicates demonic control. In one person I saw, his eyeballs were kind of whiter than normal human eyes.

7. A strong revulsion when the name of Jesus is mentioned or the Bible is quoted. When this happens, such a person would scream, curse, shudder, block his/her ears or fall to the ground. Most will display irrational hostility against Christian churches or the Bible.

8. Abnormal fears or terrifying panic. This is due to demonic torment – both in dreams and reality. Watch out also for abnormal sleeping patterns.

How to be free:

1. Verbally reject Satan and his demons and believe and boldly confess the Lord Jesus Christ as your God and faith in His finished work on the cross (Rom. 10:9-10).

2. Prayerfully confess the sin of pride in seeking occult power and renounce each occult sins/rites dabbled into. Break and renounce all pacts, covenants, commissions, rituals, seals or oaths made (1 Jn. 1:9).

3. Cast out the demon spirits that have taken residence (Lk. 10:19). For those who have worked with or invoked specific demons, each has to be rejected by name and cast out in Jesus’ name. This requires fervent prayer and of course, fasting.

4. Destroy all occult materials, emblems or books by fire (Acts 19:19). Retaining occult materials will keep the bondage intact. Finally, stand firm in your freedom in Christ and don’t be re-entangled in the “yoke of bondage” (Gal. 5:1).

2 thoughts on “The Tentacles of the Occult II”